You are here: PSPad forum > English discussion forum > Re: How to change font only selected text (not all?)

Re: How to change font only selected text (not all?)

It's the same as you will write HTML code directly. You are able to get same result.

No, it isn't. Find definitions... I am sorry, I need to earn money now instead of senseless discussions.

It's common finding insolent comments in app forums, of course... But it's a bit disappointing seeing one from an app's own developer, who usually consider themselves above such things. Maybe it's just a reflection of our new, less-tolerant world.

"Text" means "a book or other written or printed work, regarded in terms of its content rather than its physical form." That is, just the words, not how they're styled.

However, some of us (and yes, I know others!) use text editors for keeping notes; copying and compiling info from webpages and other sources; replying to email; sorting (which can't usually be done in online editors), and many other things. I've been computing since the days of MS-DOS, and text editors have always been my most often-used apps. (I've done some coding, but always in IDEs that provided their own specialized editors.)

That said, I have come to appreciate text editors that allow you to change the display font they use.

Coders value monospaced fonts because code is easiest to read that way, where every character is as distinct as the rest. It also allows block copy/paste operations, which are useful in certain coding circumstances.

But most of us who use text editors for notes prefer to see them in proportional fonts, because our (non-code) text is easier to read that way, and we can see more of it at once.

In general, I think PSPad is the best text editor ever. It's smooth, reliable, and has almost every feature I'd ever want. (And of course the forum's great, LOL.)

Unfortunately, the only feature it doesn't have is the ability to change its display font. And I don't mean specifying multiple fonts, or saving any font info in documents. As it's been clarified here, that's what Rich Text editors are for. (Rich Text: "text that includes formatting commands for page layout such as fonts, bold, underline, italic, etc.")

Having said all that, I don't think that the definitions of a "text editor" means they must be limited to monospaced fonts. That's not a document issue; it's a usability issue—just like the ability to change foreground and background colors, show or hide toolbars, change and save window size and position, and customize any of an editor's other visual characteristics so it works as well as possible for each user.

If PSPad's display font were user-selectable, PSP would still be a text editor. The files it saved wouldn't contain any font, styling or formatting info; only how it displayed them would be affected.

People who develop text editors either allow their users to select their own display font, or they restrict it to monospaced fonts only—or, in PSP's case, they require you to use one specific monospace font. (I'm sure there are other editors that do this, though I've never seen them... However, it seems oddly severe considering that many monospaced fonts were developed specifically for coders!)

I'm not sure why a text editor's developer ends up with one attitude or the other, but I'm guessing it's based on:

• How useful a choice of display font would be to them, personally

I'm sure some developers also have a certain "purist" attitude—the belief that coding is the only "important" or "real" use for text editors—and that everyone else (e.g. note-takers, list-keepers) can use Rich Text editors (which seldom have all the features of text editors), or full-blown word processors (which are way overkill, require extra steps to save text by default, and so on).

I don't know which of these categories PSPad's developer falls into, but it's none of my business anyway. You can't tell developers how to write their own apps—especially if they make them freely available.

I used and enjoyed PSPad for quite a while. Then I realized how much better a proportional font worked for me. So I'm now using Notepad++, a text editor used by many coders, than nonetheless allow users to choose their own display font.

Again, the vast majority of coders may not care about that, because they wouldn't find it personally useful. That's how many things are in life: People tend to ignore, and even invalidate, things that don't personally interest them.

It's probably a safe bet that most people who develop text editors are primarily coders. If one of them goes to go to the trouble of allowing a user-selectable display font, they must get some pleasure out of making their app as useful as possible to everyone who'd want to use it. But again, no one can make that sort of choice but the developer him- or herself, any more than they can change the kind of person that developer is. 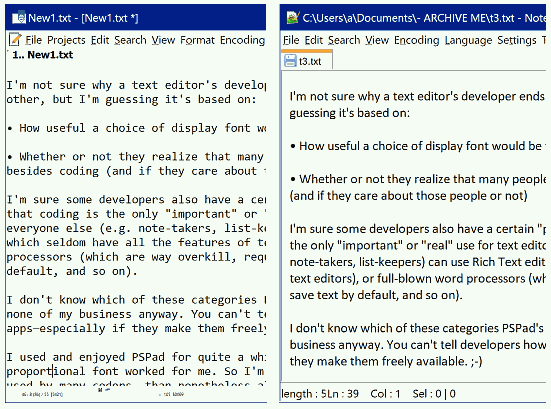